Conquer Fear in order to win 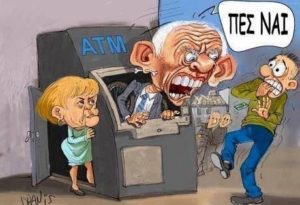 I do not know of a stronger means of making wither a young person’s hopes and dreams, before they even come into bloom, other than Fear. Fear is the most paralyzing of human sentiments, and our enemies know it.

When are you to take that proverbial first step into the journey of your life as you want it to be, if you do not move from the flock of mind-and-will controlled individuals that form today’s society? If you come to think about it, most of the time people are subjected to control by the ruling elites, but no other tie is more obvious to us than the 20th century and, alas, our era of mass communication -and mass hypnosis.

Fear not though, because the enemy is powerful, enough powerful if we let him grasp us by the hand, and get us thinking of how to get away, but not powerful enough to decide our fate, for our fat lies in the almighty God’s hands-and ours.

Fear is an instrument of repression in the hands of the self-proclaimed elites. Inflicted Fear, as in our societies, post-II World War, is not anxiety, a sentiment related to specific conditions, such as lack of health or loss of employment. It is abstract enough and common enough, to affect all. Fear is sawn deliberately and pruned regularly so that The People tend to seek the fatherly presence of the political, religious or other power that instills it, in order to feel protected by the chosen Fear it projects. Fear is an enemy to the Free Will and the most anti-democratic means of propaganda. To paraphrase Sophocles in Antigone: “Fear teaches the steadiest minds to waver.”

Not in the case of Golden Dawn, the nationalist party of Greece whose leaders (of whom my husband, party co-founder and Deputy of State, Christos Pappas) and dozens of members and sympathizers were put to prison without trial for up to 18 months in September 2013.

Fear was the means used by Greek government, Media and foreign lobbies and personalities against public opinion, to put a halt to the emergence of the nationalist party, climbing at the time to 18% in the polls. This campaign of Fear, tried and failed, in the case of Golden Dawn paradigm. But it doesn’t mean that it will not be repeated, and it is up to us to learn how to face it. Golden Dawn rose to be Greece’s third political force in spite of all the propaganda campaigns, the insults, the silent treatment, the imprisonments of its leaders, and the brutal shooting outside its offices in a northern suburb of Athens on November 1st, 2013, that left two young comrades dead and two seriously wounded.

People have always had a tendency to doubt Authority. This is not a privilege of the Anarchists or the Left, as modern ideological structure would have us believe. People, as sovereign creatures sharing in the wisdom of God and the Cosmos, are reluctant to give away their right to think and decide, to self-proclaimed Leaders, even when they have sealed the ascend to power of the later, with the all-mighty vote of The People.

Nonetheless it is also within the human condition that some people do have “what it takes” to become Leaders, and to form alliances that provide them with the ability to rule over the rest, for better or worse.

Some may command respect through their acts of valor and service to the Community. All of them, however, make use of the powerful tool: Fear. They make their presence indispensable by pointing out true or imagined enemies or they impose their will by making The People fear their acquired powers, their entourage, or their wrath.

Fear can become a real threat to life, as in the actions of the Police beating up demonstrators of an organization that is not acceptable to The Power, or can be plasmatic as is the case of our modern democracies. People fear ISIS, for their mass, blind, ritual killings of sheepy Europeans, as Americans used to fear Al Kaida when it allegedly brought down the World Trade Center back in 2011; no one came face to face with them in an open war, but everyone fears them. It could have been AIDS or Ebola, or entities innocent enough like mosquitos, chicken and pigs spreading fever. ISIS however does have its bright side; they may be killing people, but not Muslim or Jewish. More importantly, ISIS should not be confused with the Muslim. Muslims are good, the Coran is good. It is all the Europeans’/ Whites’ fault that they are getting bombed, walked over by trucks or slaughtered on their church’s altar. They are intolerant and racist. If the Media says so, then it must be true.

The Fear of Doubt and “not enough”

The Media can create the Fear of doubting own own ability to decide for our future, while at the same time praising Democracy and Parliamentarism, as is the case with the BREXIT vote of the British people. We, The People, are “not enough” to decide. As in consumerism in a society functioning with borrowed money, or as in disasters that happen on the other end of the planet, but are broadcasted in a way that makes the threat real and imminent, we cannot face our own decisions. Someone else with Power, Wisdom and vision beyond ours, must be the one who decides for us against our will. And this, in turn, provokes Fear.

Fear must be constant among The People if modern democracies are to follow through with imposing their plans for the mass extermination and replacement of European populations, starting with or aiming at the annihilation of traditional values and customs rooted in the Westerner’s conscience.

If our political system honors and prostates in front of the Democracy of the Markets.

If all of the political parties vow in the name of the Freedom of the person to consume the by-products of the elites.

If it sees itself as powerful enough to impose its will on anything from marker raqueteers to same-sex “marriage” to GMOs and the TTIP,  it recognizes one and sole enemy: Nationalism, the political voice of the reality that it wants to subvert.

Nature, the eternal, divine creation, stands on the way of the New World Order, the distorted man-made creation, that some may argue is a product of human vanity, or of the vanity of the Snake, the first to doubt the divine authority, after God imposed it on the very capable and chosen Angel who dared threaten the divine spell.

The N.W. O. elites see one enemy under different names, one more frightening than the other: traditional Christianity, family, national supremacy, filed under the names of “nationalism” and “racism”.  To the N.W.O. leadership, all these represent all that they wish to abolish, all that does not serve them for subjugating The Human, all that is preventing it from functioning according to their plan.

Who is imposing Fear?

In the case of Golden Dawn there are three major factors which apply to all cases in one or other way.

A)                 The persecutors themselves, in the government, justice, security forces and other public offices.

C)            The ones who place the order of extermination and the campaign of fear: They have some infamous acronyms, in organizations vowing to protect one and only one People by subjecting to their wills and purposes everyone else. Their faces you rarely see in public offices. They give the orders that the top rich and powerful of the world pass on to them in their quest for even more power.

“Nothing can scare us!” shouted a handcuffed Ilias Kasidiaris, spokesman of the party, as he was transferred to the prosecutors’ office. “Do not be afraid of them!” shouted Christos Pappas, the parliamentary spokesperson, flanked by hooded anti-terrorism police officers carrying machineguns. “Mother, do not be afraid; long live Golden Dawn!” said to his mother a heavily wounded Alexandros Gerondas, shot on 1/11/2013.

Fear is known to all. The way to face it, is what we must work on.

On my first visit to my handcuffed husband in October 2013, alongside his elderly father (his mother was too weak to stand up) and our three underage children, I was looking for a phrase that I could utter in the few minutes we would have together, a phrase that would give him some strength and courage. Finally, I said: “Look, all our lives we have been reading and discussing what we would do, if our time came. Now it is the time of the exams. We must do well in the finals!”

I am not sure that that was the finals. But I can tell you how I managed those long months of violation of our homes and lives. Through the support of our family and friends. For the sake of the lives of our children. Through prayer to God and Virgin Mary. And with the strength of our comrades for whom I woke up even at the least auspicious of days to gather with them and shout and support our comrades outside the Supreme Court, the State prison, our offices. “If not me, then who?”

Nothing scares us, because we know that our hearts are clean, out struggle is for our people and for our land as God intended it. We shall all die one day, sooner or later. We might as well live as good and as true as we can.

Let me remind you of one final reason why we should fight for our civilization, our nations’ existence and our own, in the words of someone who fought through two centuries of oppression and fear, violence and lies, Alexander Solzhenitsyn :

“If we are too frightened, then we should stop complaining that someone is suffocating us. We ourselves are doing it. Let us then bow down even more, let us wail, and out brothers the biologists will help to bring nearer the day when they are able to read our thoughts are worthless and hopeless.

And if we get cold feet, even taking this step, then we are worthless and hopeless, and the scorn of Pushkin should be directed to us:

Why should cattle have the gifts of freedom?

Their heritage from generation to generation is the belled yoke and the lash”.