How we want it

Europe is a sacred place, a source of civilization, united by philosophy, art, religion, politics, architecture, metaphysics, heroes and epic.

Europe is unity in diversity. The guarantee of individual and civic liberties but at the same time of hierarchy and transcendence, are fundamental to its way of thinking and practicing in common. Europe is a mosaic in which all parts are indispensable, magnificent and powerful, when taken together.

Today all of Europe’s components are in danger. Demographic collapse, massive foreign invasions, spiritual, cultural and ideological disintegration, subordination to external powers, consumerism, the cult of the markets and materialist opportunism threaten risk to extinguish its identity as well as its biological substratum.

Europe is trapped between foreign imperialist wills, third-world immigration, and the power of both the liberal and communist ideological dictatorships that are subverting it, using institutions under Liberal-Masonic and Leftist-Trotskyist leadership.

Europe, pressured by the Chinese advance and by the American reaction, by the loss of the Atlantic center of gravity, the trend towards multipolarity, needs to find the strength to organize itself to safeguard at least its material interests, and it is beginning to do.

Europe cannot survive and be reborn, unless it has the strength to react to those threats, a strength that would guarantee its interests at all levels.

However, a plan of European renewal cannot be limited to this. Europe must reverse the demographic trend, free itself from both liberal and communist dictates, recover from spiritual, ideological and philosophical disintegration, and express itself in all of its aspects and its essence.

In the era of satellites, Europe must create a new sovereignty, a confederate sovereignty with some imperial aspects (military, space, foreign policy). We must re-imagine the renewal of its institutional forms in order to guarantee freedom in the national and cultural spheres, their independence and their unshakeable alliance.

We envisage our Europe as an alternative to the rest of the world – and to the EU ruling class itself – in the way of being and conceiving its future. Capitalism must be contrasted with a broad participation of the people that recalls traditional corporate organizations. Spiritual strength is needed in order to counterbalance the weakness that characterizes our emasculated times. The community of free men and women must contest the social contract.

Europe needs an organized minority which works to achieve this European revolution, which is inseparable from the idea of national renewal, and which unites the feelings of belonging and does not mean to eliminate anything or anyone.

Europe needs an organized minority that aims for a new social organization, a cultural revolution and, progressively, the creation of a vanguard that, recovering the ancient relationship between nature and culture and living in synergy between marble and wood, changes the current bleak reality by leveraging new, contemporary techniques, from robotics to cybernetics, in order to turn what looks like a gloomy sunset into a radiant sunrise. 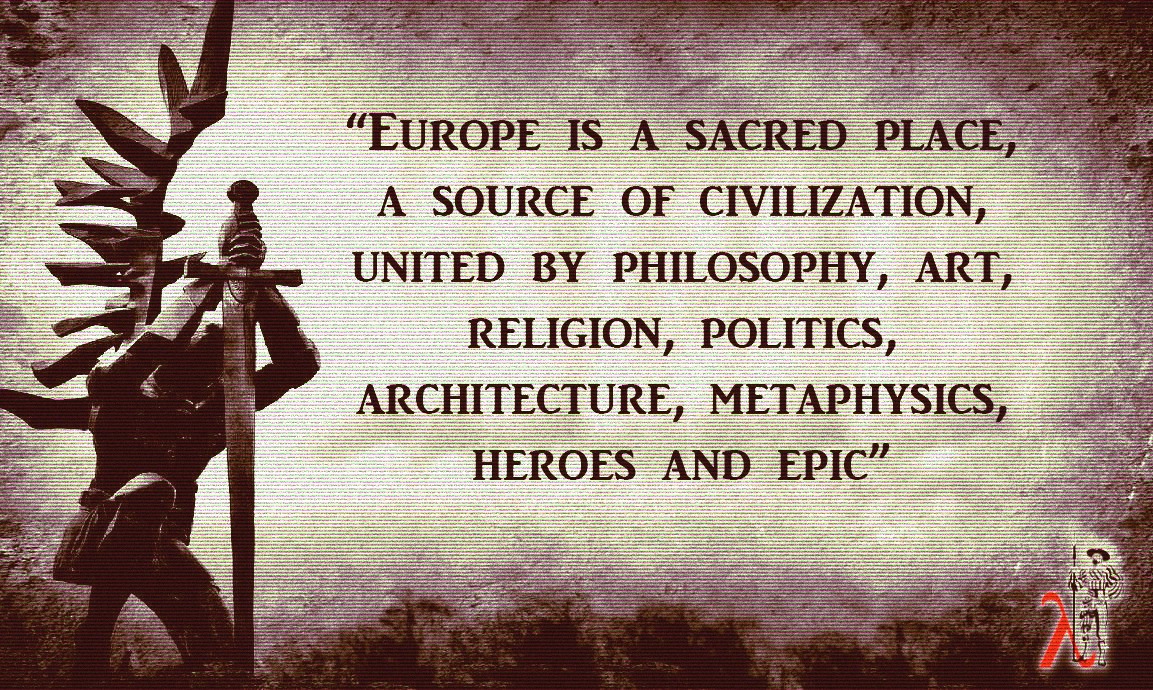 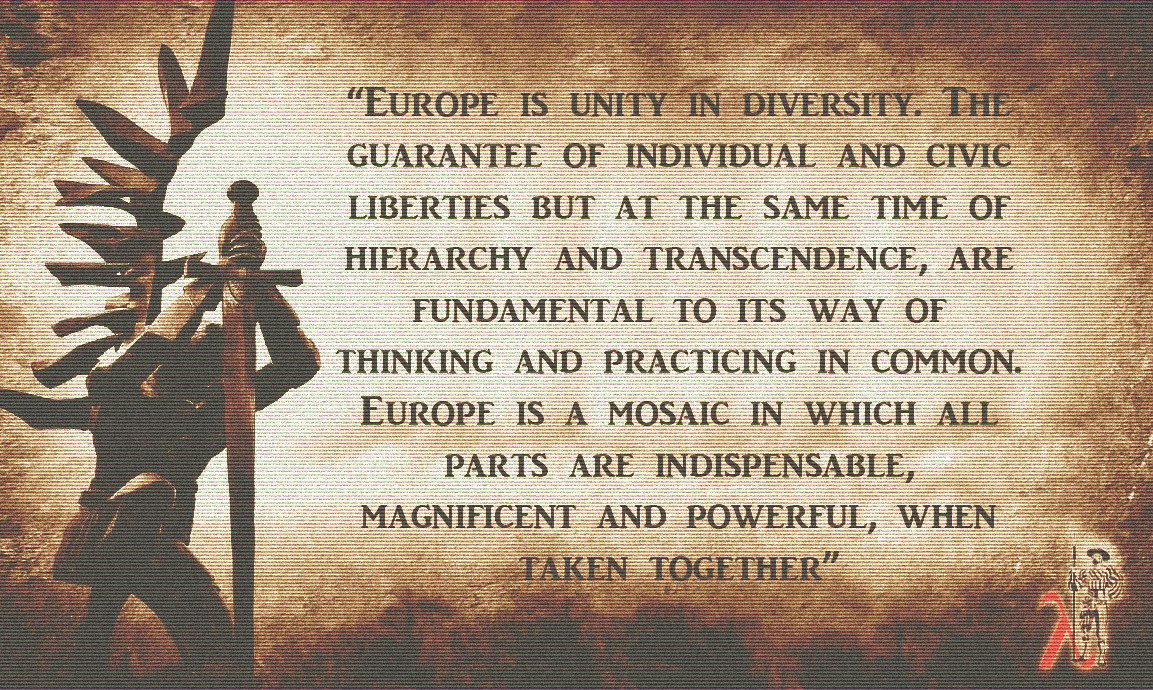 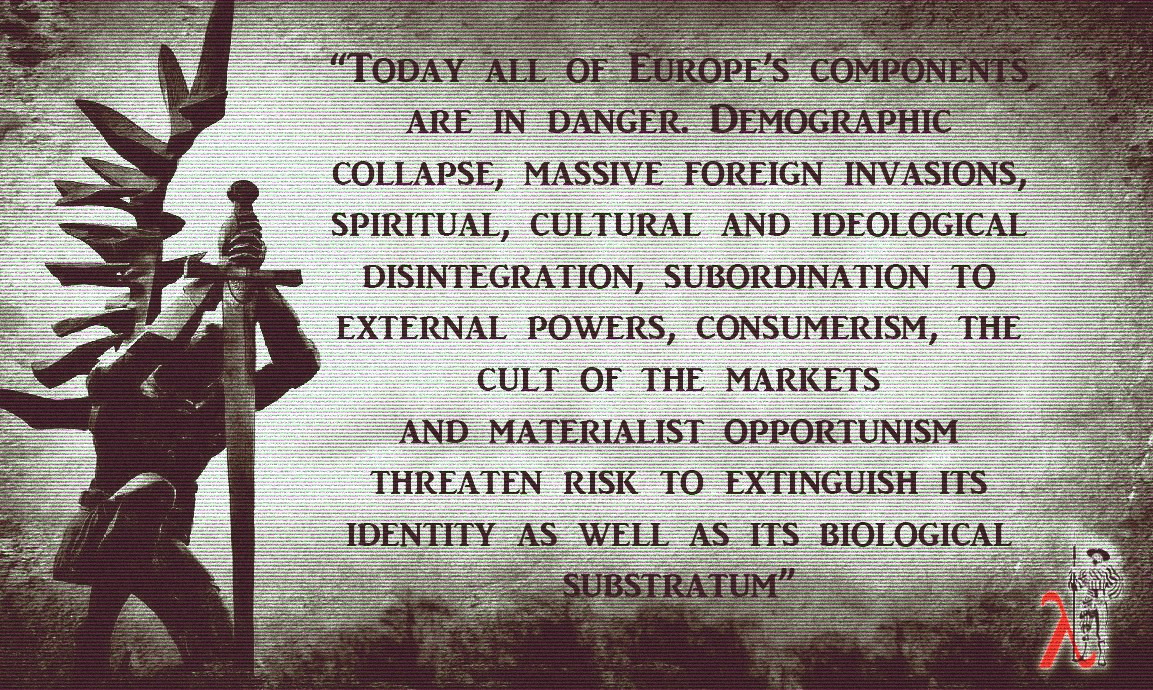 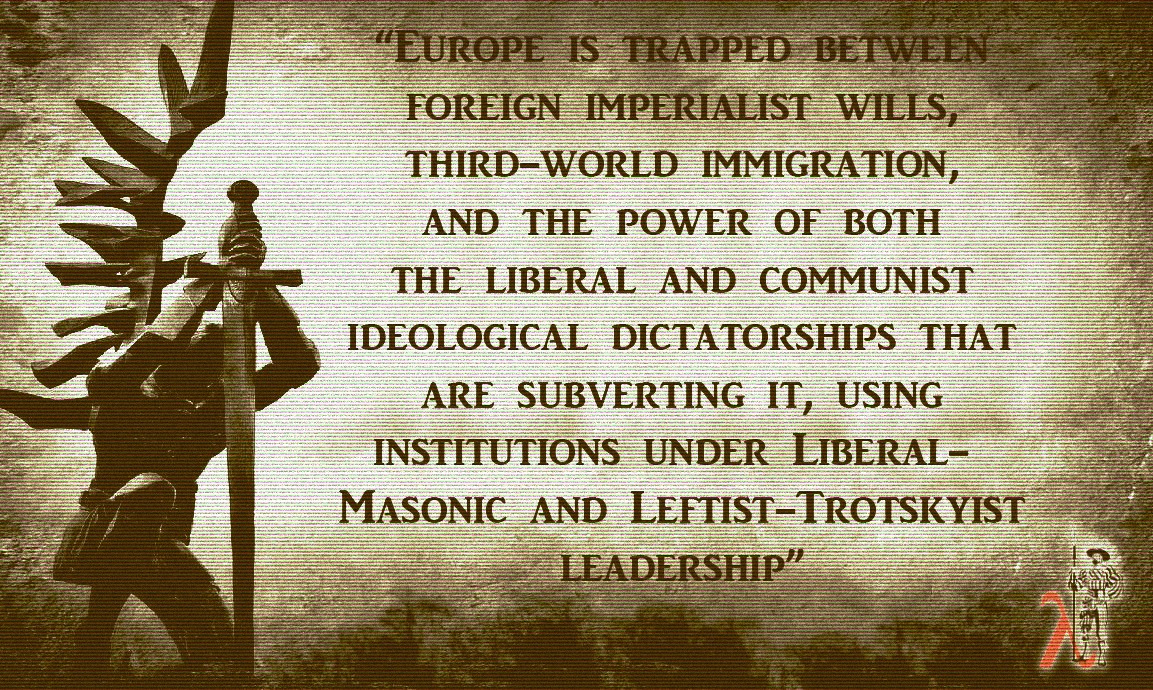 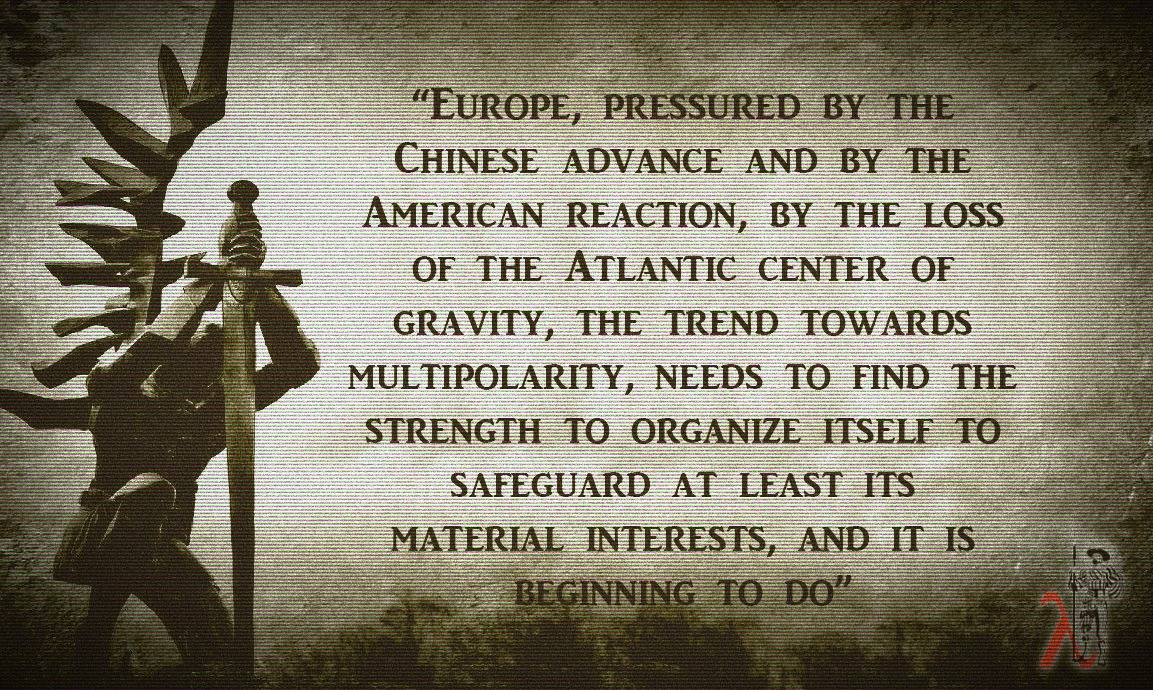 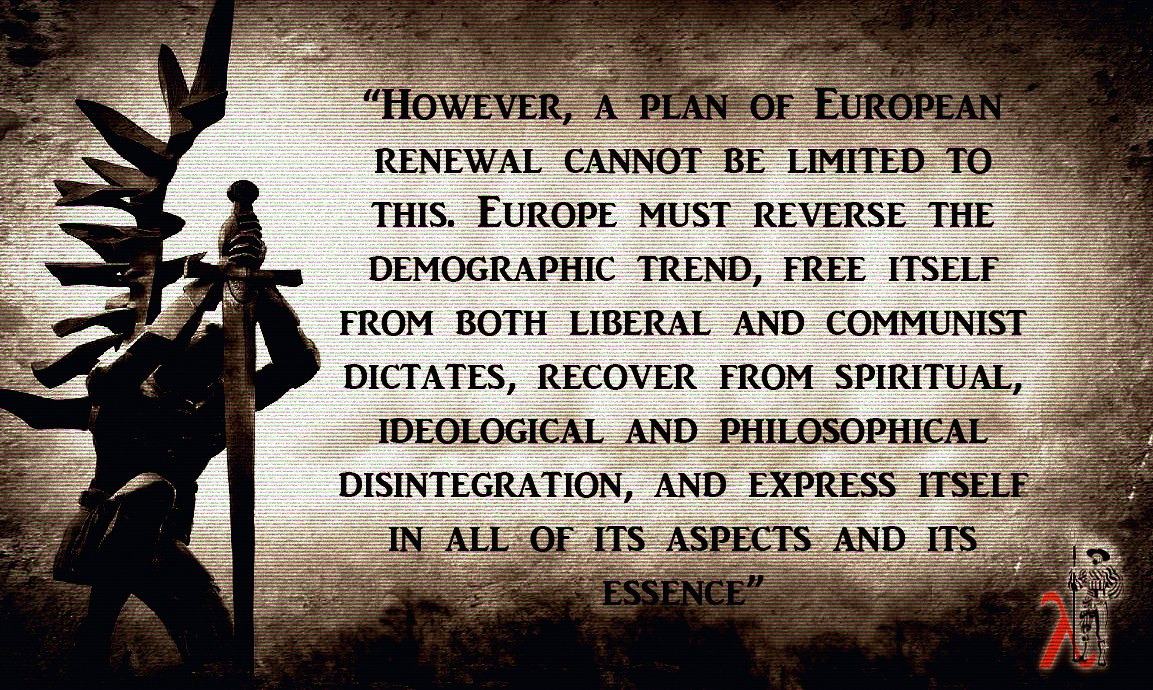 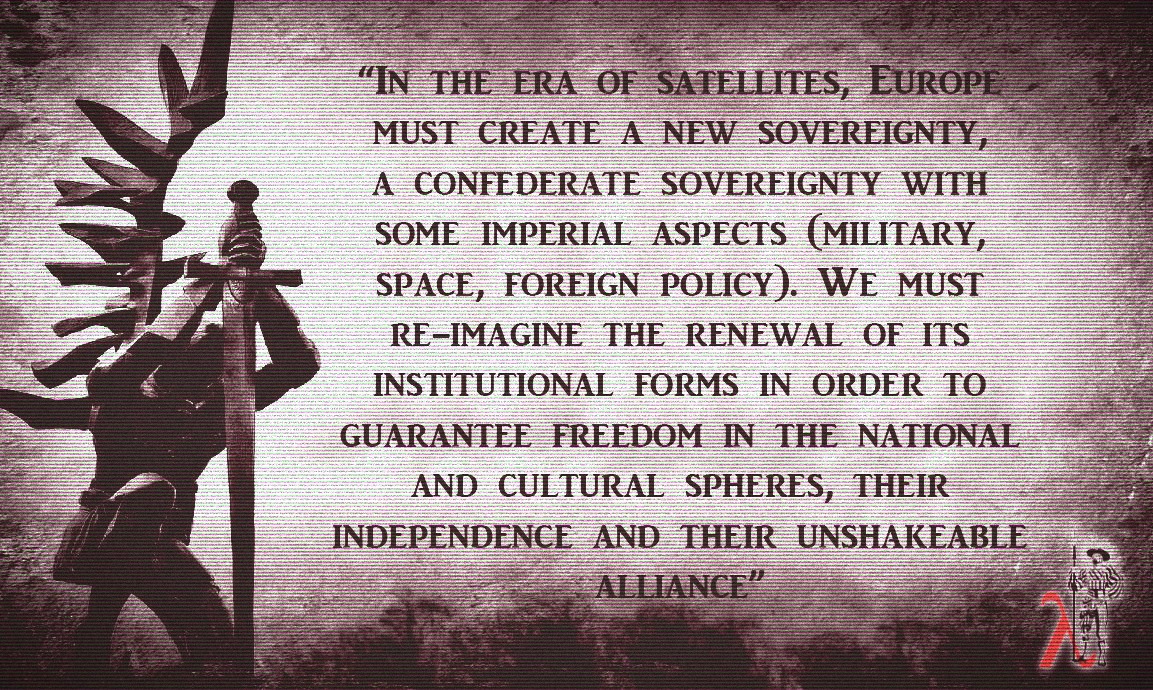 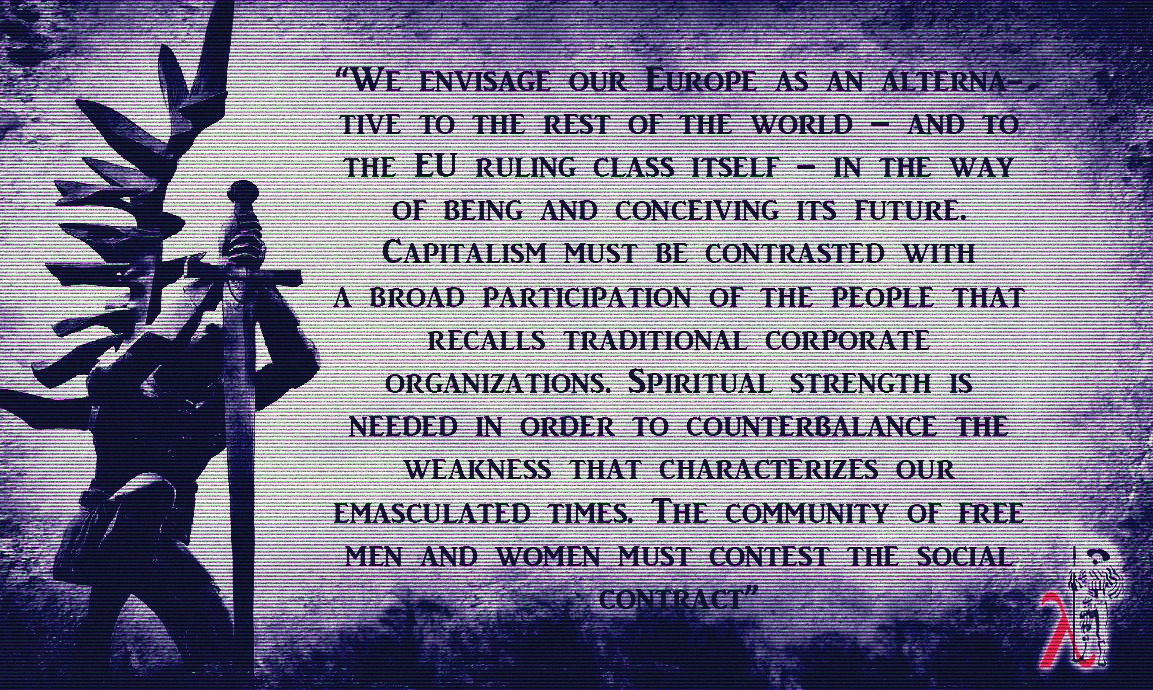 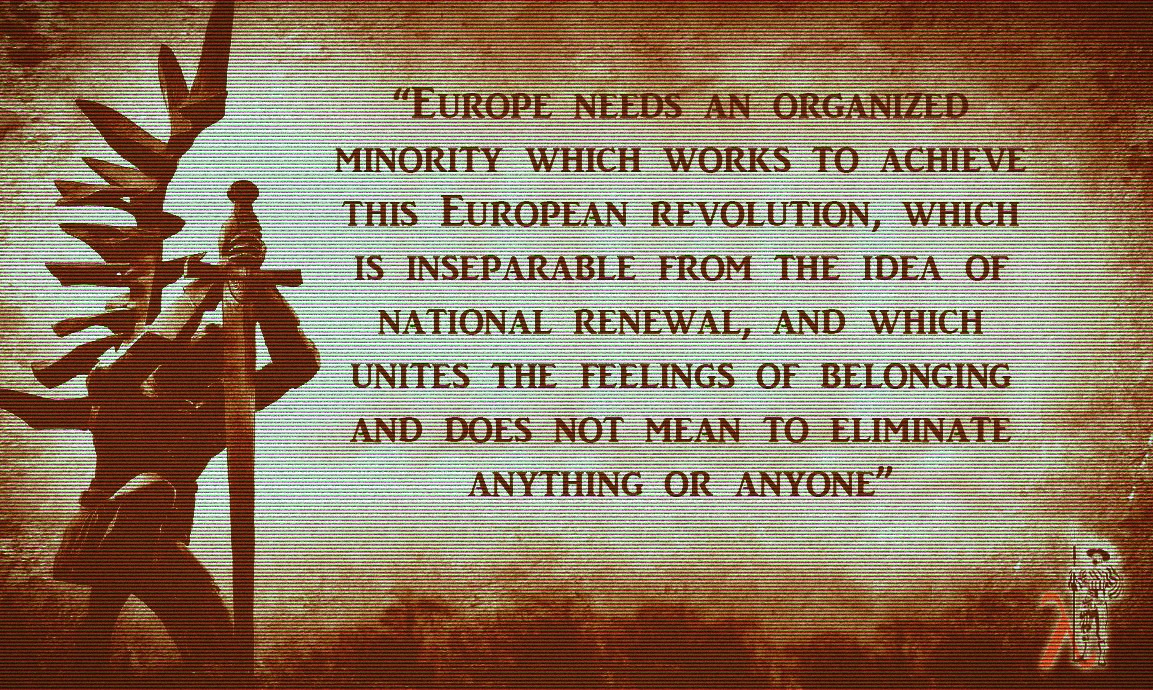 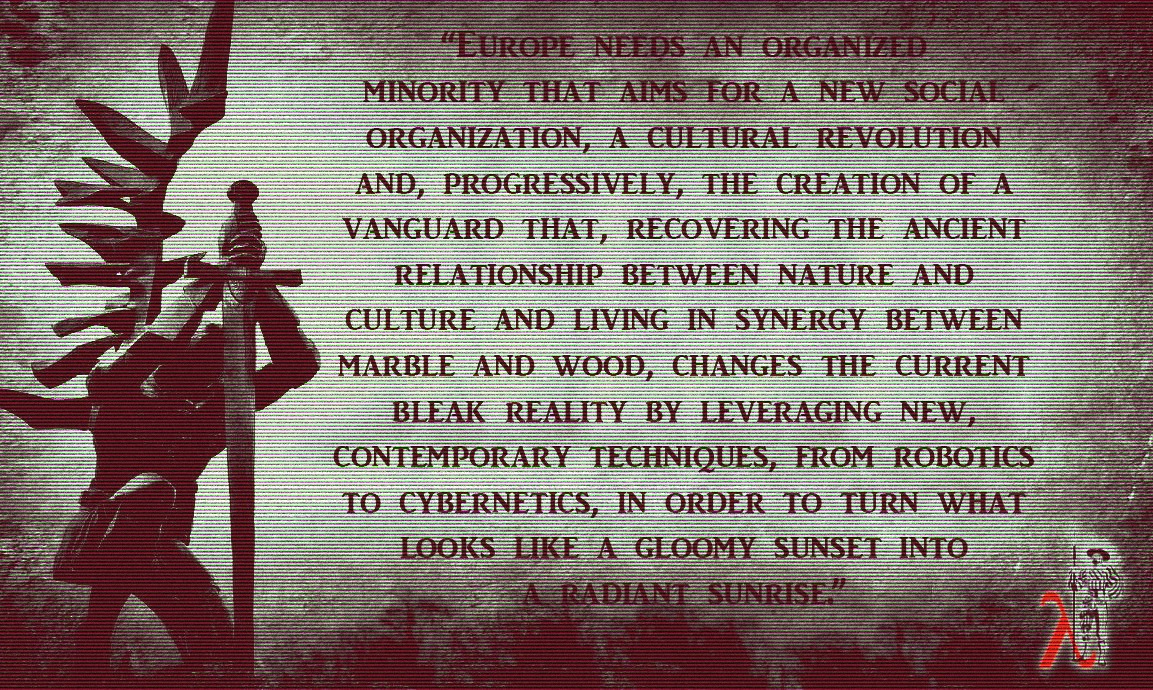 How we achieve it ? Check out this article !

Some among us may be active in politics, in radical political movements or populist parties. Some may participate in a...