Hundreds of people attended the Scandza Forum in Oslo

Stopping non-western immigration is not enough, we have to actually reverse the immigration flow. That was the message from Greg Johnson at the very first Scandza Forum in Norway.

Scandza Forum organized its first event in Norway this weekend, under the topic of “Globalization vs the Ethnostate”. More than 100 persons attended.

The conference was led by Frodi Midjord. Midjord pointed out that similar conferences have been organized in Sweden in the past, but such a large turnout at the first event in Norway was a positive surprise for the organizers.

First speaker was Olav Torheim, editor of the Norwegian cultural review Målmannen. Torheim presented the scientific theories of Frode Jens Strømnes on language and mental models, and he discussed the political implications of his theories. Strømnes had done experiments that demonstrated that finnish and swedish language represented two different types of mental models. 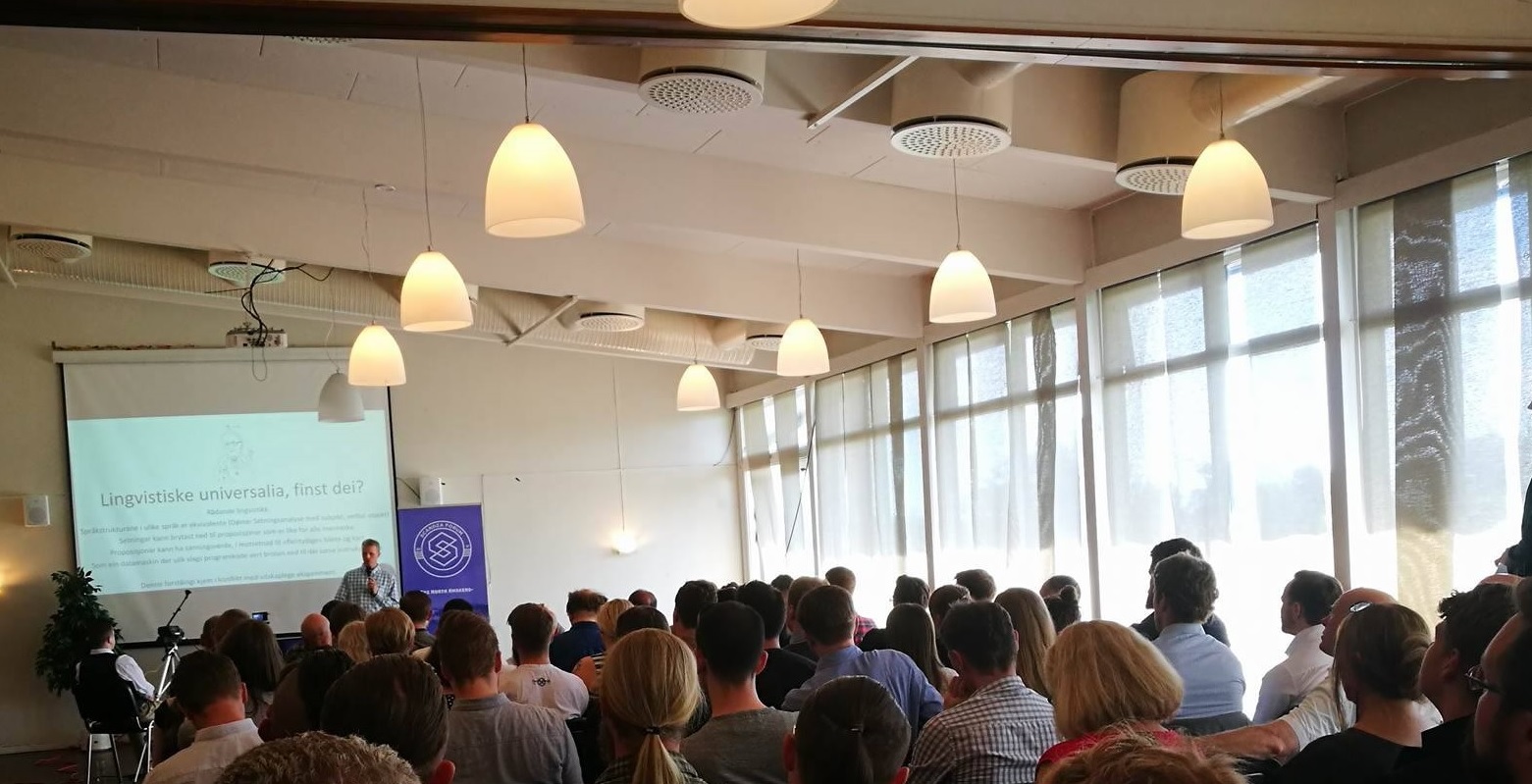 -Different languages represent different mental models. We structure the world around us according to the models we use, and therefore we think different about the same things when we use different languages. The distinction that Immanuel Kant made between “Ding an Sich” (how people interpret a phenomenon) and “Ding an Mich” (what the phenomenon is in the real world) applies to languages too.

-Learning a language is to learn to build mental models. The learned languages provide new structures for processing information. The purpose of these structures is to ensure our survival. Human cultural evolution has given us thousands of different languages and therefore thousands of different ways that we can approach reality. We cannot afford to miss a single one.

-Unfortunately, all the strong forces in the world, economically, ideologically and religiously, have interest in denying the existence of mental models. Capitalism wants to spread the same kind of language and technology all over the world, socialism wants an egalitarian world which is only possible when all humans are basically equal and monotheistic religion wants their theological truths to have the same value independent of language and culture.

Lauritz von Guildhausen: Total control and democracy on the decline

Next speaker was Lauritz von Guildhausen. Von Guildhausen started by quoting Noam Chomsky: “The smart way to keep people passive and obedient is to strictly limit the spectrum of acceptable opinion, but allow very lively debate within that spectrum…” Fundamental questions about immigration and ethnicity are not being touched in public debate, and when 100 persons are gathered to discuss them, Dagbladet found it necessary to broadcast a warning to more than a million Norwegians.

Von Guildhausen warned that “democracy” in the western world was steadily in decline. Participation in elections was constantly getting lower, while public debates and election campaigns were more and more pure manipulations based on “big data” analysis.

Even if “big data” is about large information streams and not about individuals, the possibility of monitoring all social media gives people an impression of being watched. People are therefore constantly being careful with what they say and do.

Millennial Woes and Greg Johnson: We must accept that whites are becoming minorites or we must take action

Then it was time for Millennial Woes to enter the podium. He pointed out that the trends were clear: White europeans are becoming minorities in their own home lands. If the current trends continue, it is only a question about when. Mixing different ethnic groups is beneficial to global capitalism because it creates rootless individuals who have no other way to form their identities than through consumption. 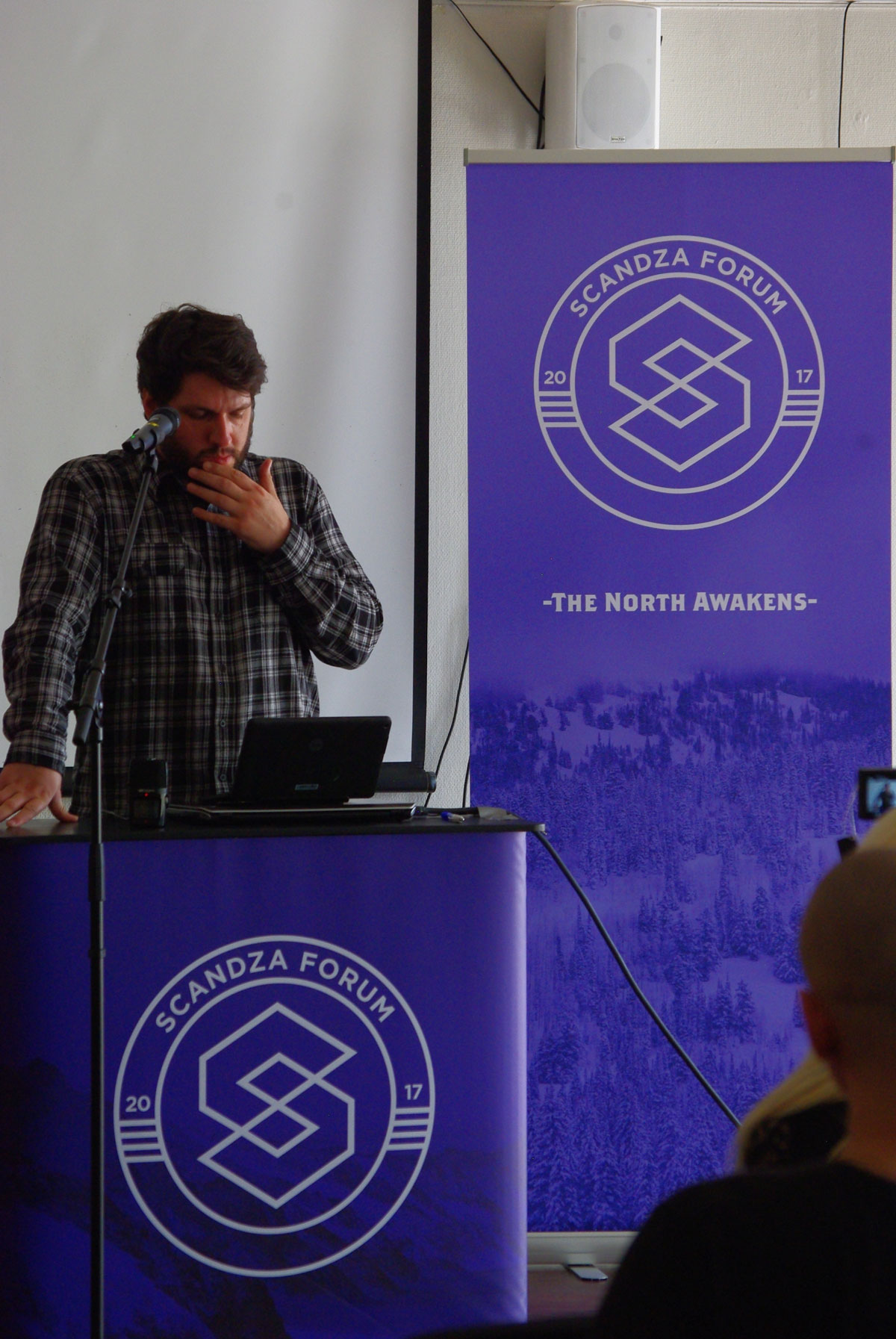 Greg Johnson said in his speech that it was not only necessary to stop immigration. In many european cities, the majority of newborns are already non-westerners. If whites do not want to become a minority, it is necessary to reverse the trend of immigration. The immigrants must leave. Johnson emphasized that he was not talking about making drastic changes over-night, he was talking about changing the tendencies. The tendency now is that every year there are more immigrants and fewer whites. Whites have fewer children while immigrants have more. It is necessary to change the trend so that each year there are more whites than before and fewer immigrants than before. -We have to imagine that in 10 years the percentage of non-whites will be back at the level it was 10 years ago.

Mike Enoch made his case against american civic nationalism. While Europeans are still divided into separate ethnic groups, European Nationalism in America cannot be called anything else  than white nationalism.

Enoch pointed out that all the American founding fathers were in fact white nationalists. American official policy all the way up to 1965 was to ensure that whites remained a strong majority. 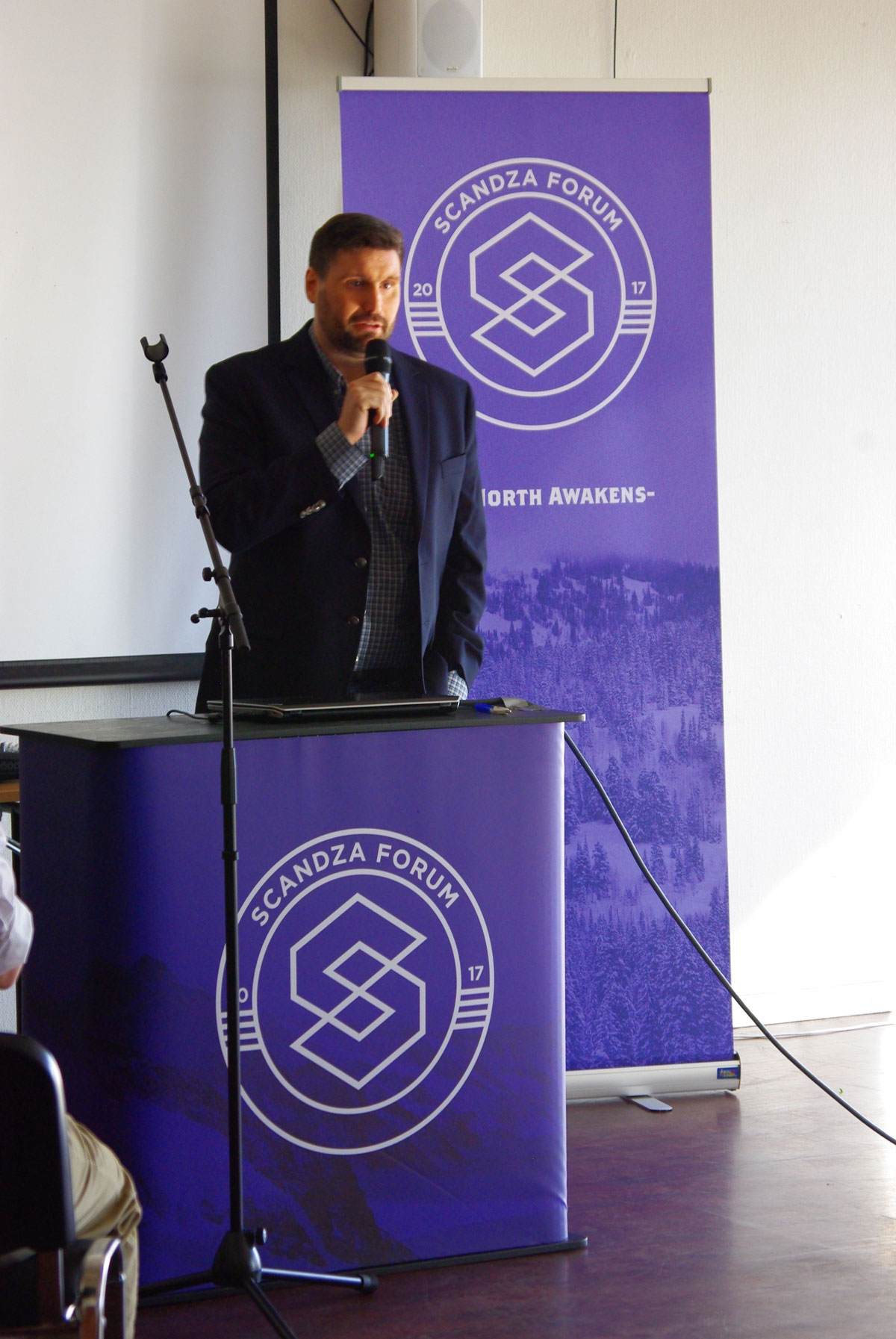 QA Session: The Remigration Issue must come on the table

Then there was time for a Q&A session. Also here the question of remigration came up.

-When white people start to take notice that the tide has turned, they will be more optimistic and start having more children and making plans for the future again, Greg Johnson said. He also pointed out that no one are really happy in a multicultural society. Neither Europeans, nor immigrants.

Olav Torheim followed up with referring to his own observation from neighborhoods in Bergen that there are fewer immigrants to see outside in the winter than in the summer. Many non-western immigrants do not feel they belong here, but they stay here due to welfare money. If the immigrants rediscovered their own cultural roots, instead of resorting to consumerism, they might go back voluntarily. Black nationalist movements could be our allies, like for example the movement of Kemi Seba who moved back to Senegal and works for remigration.

-It is also worth to mention the Lambda project, initiated by Gabriele Adinolfi, where several economical investment projects have started in Africa to promote remigration. While most of Africa will stay in deep shit, European Nationalists can select a few specific countries that they help prospering – in return for remigration. These countries could in the next also become our allies on the geopolitical level.

About the question of declining democracy, Olav Torheim pointed out that the accepted idea of democracy was that there is a sovereign people and that there is a collective will of that people. Modern national states were based on the concept that the will of the people could be expressed quantitatively through parliamentary elections. But uniformizing local culture and identity, and replacing family and local community with state-governed institutions, the modern national state destroyed the other communities which it was based on. Therefore the national state also prepared it own replacement through globalization. Today, there are no mainstream politicians who still talk about “the people” or “the will of the people”. They only talk about human rights and individual rights. Whatever one thinks of democracy is the first place, it is no more sustainable because its very fundament is being removed. If we want any kind of democracy back, we have to work for ethnostates.

The time of censorship in Norway is over

During the conference there were many breaks and time for socializing. There was also traditional Norwegian food served for the attendees. When the speeches and QA session was finished, the meeting continued until the late night hours with music and discussions.

-This conference was much better than we could have imagined, even if we were forced to replace one of the speakers just four days before the conference. All the speeches were outstanding, but the most inspiring thing was the fact that there were so many young and talented people among the audience.

-Organizer Frodi Midjord said it was an important step to organize the first Scandza conference of this kind in Norway. The large attendance shows that there is a need for fundamental debates on globalization and immigration. People have been waiting for this. The time when such issues were not allowed to be debated in public in Norway is over.

-It was inspiring, a real “white pill”,  Fróði Midjord concludes.